While Mabon is considered one of the harvest festivals, here in the warm sunny southwest, its the beginning of the cool growing season.  For me, that’s moving into the greenhouse.  Last year had gotten two bookcases which worked out very well and this year, got two more.

already, a couple of pots with lettuce and broccoli seedlings. Sadly, store bought ones as I’m behind in my seed-starting. Also some flowers.  Some are in pots outside, but will have to be bring inside at night. A Javelina has found a way into the yard and fresh pansies appeal greatly!  There are also some seasoning herbs as well as a Patchouli plant in there.  Promised to leave a lot of the shelves on the northern wall free for flowers.  Will bring in the geraniums and petunias soon.  From there we will be able to see them on even the coldest days. 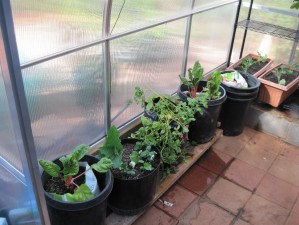 On the southern wall are some pots of chard, a volunteer eggplant that has only just made itself known, and who is now sharing space with some pansies, and a bag of potatoes.  This plant has had good foliage now for about 6 months!  In the past, have found the best potatoes are after the foliage has died off, not when it is still growing.  So I’m waiting!

By the way, those large rectangular planters each hold about 1 cu foot (28L) of potting soil. That’s one of the small bags.  This morning recycled a couple of pots worth of soil, adding a nice fertilizer that acts as a soil conditioner. and then went through a 2cu foot bag of potting soil, plus part of another!!

also rehung my greenman. Found this as a plain pottery casting at one of the local thrifts and painted it.  Have greenmen watching over all my garden spaces. 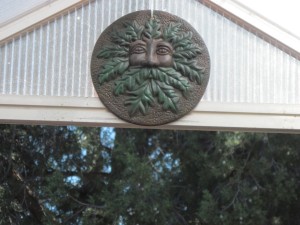 outside, there is still stuff going on in the garden.

This is the lone Nangua, javelina having gotten the others.  Its about 12 inches long right now. Don’t know if it will ripen in time, depends on when the first frost is upon us!.  There are also some spaghetti squash reaching good size, a few more zuchinni, ripening peppers, tomatoes, eggplant, and still more string beans and chard!  Its been a very good year!!