one is two knitting

this is a knitting technique that I stumbled into . . maybe others know of the technique, or another way of accomplishing this – after all great minds do think alike . . .

anyway, it is knitting a two sided piece on a set of straight needles.  Great for making a potholder, a pouch, an envelope, glass case, etc.  Like it particularly for pot holders as it makes a double layer and it is not as tight/stiff as knitting a single piece, folding and sewing.

Cast on can be accomplished several different ways: cast on all stitches and then start the knit in pattern  With this, the bottom is closed, but will be longer than the width of the finished piece.  In this photo,  cast on loosely, then knit one through the back of stitch, and slipped loop of original stitch knit or purl wise – as you are comfortable.  As you can see, the bottom is smaller than the overall width of the knitted piece.  You can also cast on 1/2 the total stitches, next row slip the first stitch purl wise, then loop the yarn over the needle for the second stitch and continue to end of row, ending with yarn loop. Then begin pattern.  When doing this technique, you can create a closed bottom to the piece by holding the loop in front as if to purl.  If you hold the yarn to the back, as if to knit, the bottom will be open. 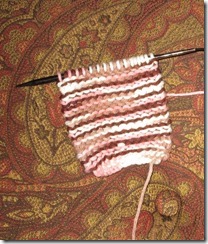 here the stitches have been separated so you can see it opens up.  the piece will look like reverse stockinette, or you can turn the piece inside out for regular stockinette look.  This is different than knitting in the round as there is a distinct fold at the edges.

cast off can also follow different techniques; cast off usual one stitch at a time and the cast off row will be longer than the width of the finished piece.  Or you can separate the stitches as shown in the above picture and cast off one stitch at a time as usual, one side at a time to leave the top open.  OR, cast off one needle and then continue to knit the other to create a pouch flap.  To close the top, and be even with the width of the piece, knit 2 together, then knit 2 together and pull the loops over as you would a regular cast off.  don’t do this too tight, but it doesn’t have to be sloppy loose.

for this pot holder – a 50g ball of cotton worsted weight yarn (this was an old Peaches and Crème), number 9 needles.  knit on 30 stitches.  Next row, holding the yarn in front as if to purl, slip one purl wise, looped yarn for next stitch.  continued to end of row, ending with loop.

This entry was posted in homesteading, knitting, patterns, self-reliance, Uncategorized. Bookmark the permalink.