When one goes Gluten free, you miss a lot of stuff like bread, jelly donuts and cinnamon rolls (no I don’t really miss cake and GF cakes are pretty awesome anyway).

These were made from Pamelas bread mix.  Second time I’ve tried it in the Solar Oven (Sun Oven name brand) and these came out better.  The Pamelas is a little too “cakey” to be a bread, so I make it in a muffin tin so I have a portion without having to worry about slices.

First picture is the before.  Top are the cinnamon experiment.  Second time for this, the first time came out okay, but they weren’t quite cooked enough.  Second pic you can see the temp and the browning that has taken place in the oven.

Middle row are an attempt for something like a jelly donut.  As well done as these were, it wasn’t cakey enough, but still tasty and fun.

The bottom row are plain. 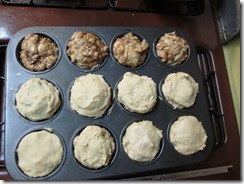 The first time I tried baking in the SunOven, nothing browned and I only left them in there for about an hour.  The moisture from the mix had coated the inside of the glass dropping the temperatures.

This time, left the glass lid unsealed.  It was closed but not clamped down.  This let the moisture escape.  Had preheated the oven to about 350F, but once I had put the food into the oven, the temp dropped severely; one because it had been opened and secondly because a cooler mass had been put in there.

45 minutes later it was still a bit under 250F, with no moisture build up.  Looked like everything as just under cooked, but edible at that point and the jelly filled ones might have been more like donuts at that point.

a half our later saw the temp was starting to rise again and things were starting to brown.  Waited another 45 minutes before taking them out.  Total of 2 hours which was a bit too much.  the 90 minutes would really have been fine.

All in all a success.  yes, there are things I would have done differently, but they are fine tuning the technique.  The basics are pretty solid!